20 Things Star Wars Fans Have to Look Forward To

WizardWorld.com recently posted a list of 20 things Star Wars fans have to look forward to in the future, including the CG animated Clone Wars series, the live-action TV series, The Force Unleashed video game, Fanboys, Hasbro’s Star Wars Mighty Muggs, and a whole bunch more to keep your Force-sense tingling. Head on over to WizardWorld.com to check it out.

In Part 1 of TV Guide’s Q&A with George Lucas, the discussion encompassed the documentary Fog City Mavericks (premiering on STARZ, Monday, Sept. 24, at 9 pm/ET), his advice for aspiring filmmakers and why Sean Connery turned down Indiana Jones and the Kingdom of the Crystal Skull.

Here in Part 2, Lucas discusses the upcoming Star Wars TV projects, the power of the Internet and the television series he was distraught to see go off the air.

On the live-action Star Wars TV Series:
Clone Wars has got all the characters in it — Yoda and Anakin and Obi-Wan and the Emperor and all that — so it’s basically the movie. The live-action series is not the movie. It’s the Star Wars universe, but it’s characters from the saga who were previously minor, and it follows their stories. It’s set between movie Episodes III and IV, when the Empire has taken over. It’s like Episode IV in that the Emperor and Darth Vader are heard about — people talk about them — but you never see them because it doesn’t take place where they actually are. There are stormtroopers and all that, but there are no Jedi. It’s different, but I think it’s very exciting because I get to explore a part of that universe that I haven’t been able to explore. Once you have a saga, it’s got a lot of requirements because it’s about a particular thing in this case, Darth Vader — and so it’s his story from the time he’s 10 to the time he died. You really can’t go off that track because that’s the story. Whereas now, I can make a left turn on 10th Street and go down there and see what’s going on.

END_OF_DOCUMENT_TOKEN_TO_BE_REPLACED

Capone from Ain’t It Cool News chats with the legendary puppet master, director and voice actor Frank Oz about his work with the Muppets, their unusual presence on the first season of “Saturday Night Live,” his own directorial endeavors, and of course, Yoda.

Have you ever been to a Star Wars convention?
“Never. I don’t do them. I won’t do them. That’s not my job. I create a character. I don’t like to exploit characters, I like to create them. I just tend to do that. I don’t do personal appearances or any of that. I’ve been asked to so many times, and I always say no.”

When you’ve been asked to do a particular voice during an interview or on a talk show, especially Yoda, you always decline.
“There are a lot of reasons. Certainly when I’m promoting a movie like this or any R-rated movie, I won’t do it because I don’t want people to think it’s a kids’ movie. And I don’t want to be a trained monkey. It’s like talking to a plumber and saying, ‘Hey, while you’re here can you fix my sink?’ I love the characters, but also I don’t want to treat them cavalierly and just kind of toss them off when anyone asks me.”

Your name has been attached to the new Clone Wars animated TV series as Yoda’s voice. Are you, in fact, a part of that, because I remember you weren’t a part of the original series.
“I know nothing about that. I haven’t seen George for about a year. I could call him and find out, but I know nothing about it. Don’t believe the Internet.” [laughs]

For the full interview click here.
(Be forewarned that there are a few moments of adult language in the interview.)

Also be sure to check out starwars.com’s interview with Oz about ILM’s work and the future of puppets here — Oz on Wizardry

Fans of the Clone Wars series can now craft to their hearts’ content with these fan-created papercraft projects. Even though the instructions are in Japanese (and a bit unclear how to download the patterns) it’s fun to see how some fans are bringing their favorite characters to life as 3-D paper models.

Here are some of our favorites:
Yoda
General Grievous
Shaak Ti
Asajj Ventress

5:13 Lights dim… retrospective video begins, a combination of footage from Episode IV, and footage celebrating its original release in 1977. Fans attending the Mann’s Chinese theater footprints ceremony. Footage than jumps forward to the prequel trilogy. Rose Parade footage and Celebration IV and all the latest developments in the saga, from The Force Unleashed, to starwars.com, Robot Chicken, Clone Wars and more. The montage ends the now familiar message, Star Wars is Forever.

5:15 Steve Sansweet, Lucasfilm’s head of Fan Relations takes the stage. He thanks the fans, particularly the worldwide 501st, “Attracted 32,000 people in London. This year has been one big party, planned by fans, run by fans, and I’m very happy to say overrun by fans!”

END_OF_DOCUMENT_TOKEN_TO_BE_REPLACED

In time for Star Wars day at Comic-Con International, StarWars.com, the Official Star Wars website, has launched a dedicated section for the upcoming animated series, Star Wars: The Clone Wars. Expect this section to grow over the coming months in anticipation of the show’s fall 2008 debut. Right now, there’s a trio of brand new video crew profiles that allows you to meet some of the talented people working behind the scenes on Star Wars: The Clone Wars. Check it out here.

In other online news, Paramount Pictures has spruced up the official Indiana Jones website in anticipation of his fourth film adventure. Check out the new indianajones.com, unveiled yesterday.

The first two panel discussions with The Clone Wars producer Catherine Winder and supervising director Dave Filoni have finished, and here’s a brief listing of what fans just witnessed:

First, an introduction to Winder and Filoni, with a great video short showing director Filoni wearing his scratch-built Plo Koon costume to the premiere of Episode III (before getting hired on at Lucasfilm). 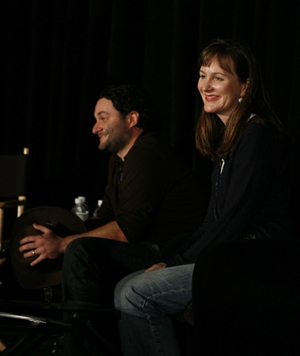 Filoni then walks the audience through a series of slides which showcase some of the sculpture designs for characters such as the clone trooper, Anakin, Obi-Wan, Count Dooku, and General Grievous. They will share some of the stylization from the 2-D animated series but also some of the reality from the filmed saga. Filoni describes the style as “leaner and more elegant.”

A video is shown which introduces much of the team at Lucasfilm Animation housed at Skywalker Ranch.

The audience was then treated to a preview trailer of The Clone Wars, which is currently available to view by all fans at the new starwars.com! Click here to see the new Clone Wars trailer.

Stay tuned for a more comprehensive rundown of the The Clone Wars panels at Celebration IV!

The Official Star Wars Blog
Create a free website or blog at WordPress.com.